Setting Global Standards... One customer at a time 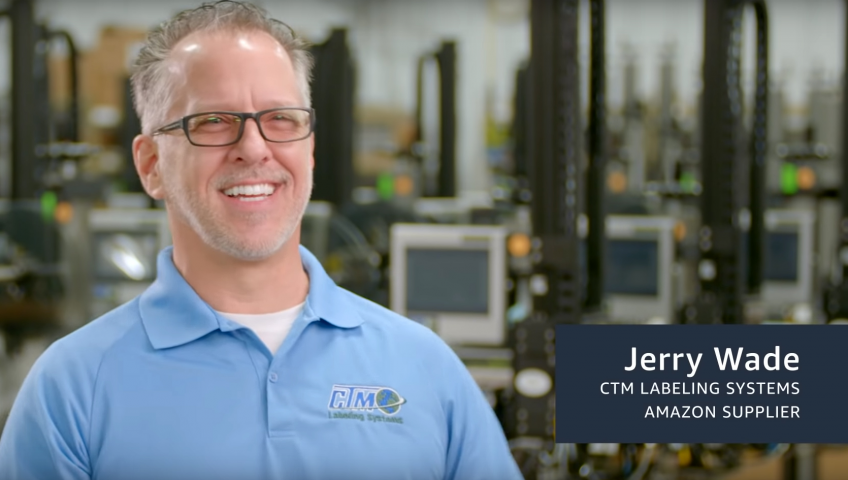 <smallJerry Wade of CTM Labeling Systems was interviewed for an Amazon video blog. A major supplier of automated labeling equipment for Amazon’s Fulfillment Centers, CTM was featured by the company to highlight the suppliers Amazon works with.

CTM Labeling Systems was featured recently in an Amazon community video for supplying the majority of printing labelers for Amazon’s Fulfillment Centers.

March 28, 2019 (SALEM, Ohio): CTM Labeling Systems, a leading US supplier of world-class labeling systems, was showcased last month in a video blog published by Amazon, the iconic online retailer. The video and accompanying blog included interviews with CTM management, as well as video footage of CTM’s production processes and downtown Salem, Ohio where the company is based.

CTM Labeling Systems is a major supplier of automated labeling equipment for Amazon’s Fulfillment Centers. The company manufactures the majority of labelers used to automatically apply labels on products at Amazon Fulfillment Centers in North America.

“Amazon highlighted CTM Labeling’s capabilities and how we mutually benefit from each other’s success,” said Ed Schneider, Director of Sales & Marketing for CTM Labeling Systems. “They wanted to share our story — what we do, how that benefits our company and the Salem community — everything from a 20,000-foot perspective.”

Check out the video here.

Amazon ships millions of products every day that have been labeled by CTM labeling applicators. Speed is essential to Amazon’s labeling process. Each applicator labels around 60 products a minute, about one every second.

The more than 10-year mutually beneficial partnership allows CTM ample access to supplies and inventory that in turn benefit CTM’s other customers. This allows CTM the ability to respond to business peaks and valleys. It effectively positions CTM to expand as a company and be more efficient in its technology.

“Amazon’s trust in CTM as a company is a huge benefit,” said Brian Chivers, Assistant Director of Sales & Marketing for CTM Labeling Systems. “Our partnership enables us to utilize the labeling technology we’ve invested in our facility and increase our manufacturing capacity.”

“Our relationship with Amazon is a feather in the cap of Salem,” said Jerry Wade, Midwest Regional Sales Manager for CTM Labeling Systems. “This kind of partnership provides a substantial ripple effect to the local economy.”

View the press release on Yahoo Finance  and Digital Journal.

Based in Salem, Ohio, CTM Labeling Systems is a major manufacturer and supplier of world-class labeling systems. All of the company’s labeling systems, applicators, and printers are made on site in the USA.